Dean Potter, one of National Geographic's Ten Adventurers of the Year, set a world record for base jumping in 2009. 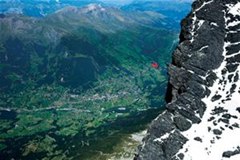 "On a sunny afternoon in mid-August, Dean Potter stepped onto a tongue of rock just below the summit of Switzerland's Eiger and jumped off... By the time he pulled his chute and drifted to earth, Potter had spent two minutes and 50 seconds in flight. It was the longest BASE jump ever, covering some 9,000 vertical feet and nearly four miles.

Potter is one of the best known rock climbers on the planet, renowned for daring free solos (no rope, no harness) up some of the world's tallest rock faces... Potter free soloed a hundred-foot slackline over the yawning abyss at Yosemite's Taft Point... In short, this was the year that Dean Potter outgrew the title of climber and became something other, something that defies definition—awe-inspiring, maybe crazy, and most definitely badass."

"Awe-inspiring, maybe crazy, and most definitely badass"...just what we like here at WonderHowTo.